skip to main | skip to sidebar

Honestly I'm really not but I like to pretend that I am!!
But I did a pretty darn good bad ass thing this past weekend though.
I am officially a Tough Mudder
It was amazing and honestly the biggest physical accomplishment of my life (seriously, having my kids were way easier)!!
In the couple weeks leading up to the Tough Mudder I was VERY nervous. I feared the Mudder!
We drove up Friday night to Tahoe City.
Luckily, the Mudder was help at Squaw Valley which was maybe a 15 minute drive from the house we rented.
Amazingly, I slept like a baby Friday night.
So good in fact, that I snored Matt right out of the bedroom. It was a combination of the dry altitude and the reminence of my cold that I had a couple weeks ago.
Sorry babe!
I rolled out of bed at about 8 Saturday morning feeling relaxed and rested.
I took a shower (I know, pointless, but I had some legs to shave), threw down a big bottle of water and chomped on a banana.
Pulled my hair back, applied a little bit of gloss and totally failed at the act of putting on deodorant. But hey, my lips were a nice shiny pink. Who cares if I was stinky cuz there were thousands others like me!!!
We pulled up at Squaw Valley (absolutely beautiful)!! I headed off to check-in, get my bib, and my number written in sharpie on my forehead (sexy much) while my friend and my hubbs went to Starbucks...jerks! Well actually, Matt went to Starbucks and I made my friend go with because I was totally lost.
Found where I needed to go, only to realize that I left my ID in the car. So back to Starbucks to get the keys from Matt then ALL the way out to the car I go, then ALL the way back to check-in. 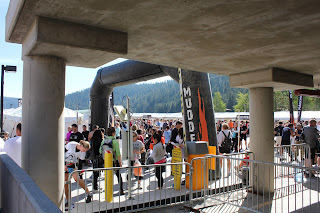 I finally hooked up with my dear friend, the ringleader of this event, and we set off to join our team. 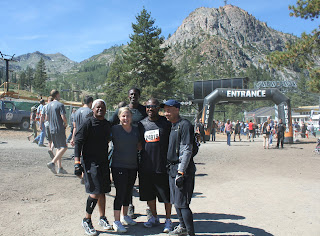 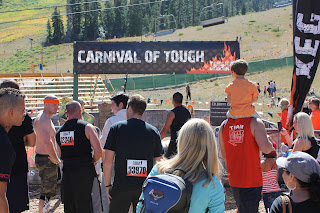 By this time, it was about 10:30 so we hung out in the parking lot and tailgated.
By tailgating, I mean, we indulged in obscene amounts of water, banana's and GU gels! Oh we saw others, others that partaked in beer and whatever else they had. But when you aren't a young pup, and just getting ready to set out on a 12 mile hike up and down very steep ski slopes (easily 8 miles up and 4 miles down) which had about 24 obstacles scattered through the course, beer wasn't a priority!!
Before you knew it, the clock struck 12 noon, and we headed to the starting line. 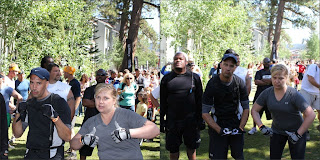 My awesome sister and her hubbs drove all the way up there to support us and cheer us on. Love her!!
About 10 min prior to our start time, we recited the Mudder pledge, the National Anthem, and did a little dance to Eye of the Tiger. 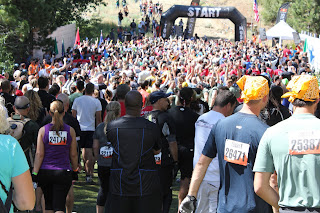 Then off we went through a haze of orange, stinky, choking, smoke!! 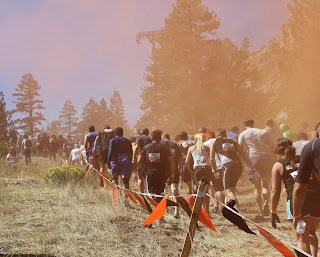 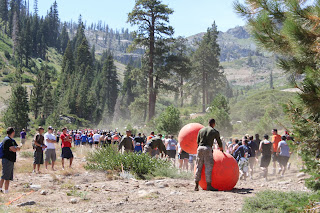 It wasn't long before the, oh shit...what did I sign up to do, set in.
At mile 0.25 (yes 1/4 of a mile into this) I rolled my ankle and fell face forward. Thank you to gloves and UnderArmour, I was only sore and bruised...but no blood!!!!
After dusting myself off, I charged on and up and up and up and up. I kid you not, we literally ran up ski slopes. And these were not easy peazy trails either. The path was made out of horrible, easy to roll your ankles/fall and break your neck, rocks. Folks, ski slopes are made to come down, that is why there are chair lifts to take you up the mountains. But nope, Tough Mudders charge straight up the face of the mountains!! 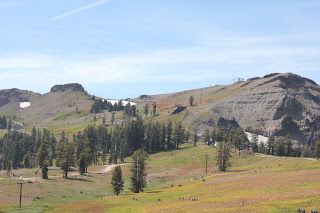 So at about 2.5 miles, we come to a bit of a flat landing. We regroup to our group of 5 and go to charge on up and up and up...again. As we start our jont, I notice a sign, signaling an obstacle. It was appropriately titled The Devil's March. WHAT...The Devils March is just NOW starting!!! What the hell did we just run up?? It was at that point that I knew the creators of this course were probably sadists!!!!
After we marched for hours (or so it seemed like), we took a nice dip in some ice water. Yes, ice water. So much ice in fact, you could not get to the side in order to pull yourself out!!! After numbly pulling out of the ice, we somehow managed to work our way to the next obstacle...Mount Everest!! 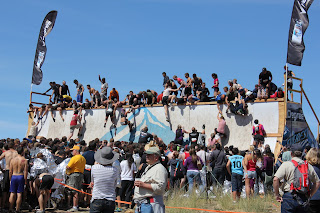 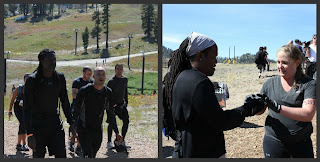 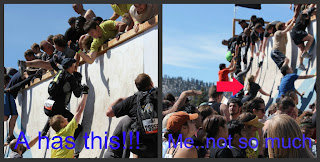 At that time, my lowest point, I saw my hubbs, my rock, my biggest supporter ever! I gave him a hug, muttered some unintelligible words into his shoulder and fought back tears of defeat! Like any awesome husband, his words of encouragement went something like this "I know you can do this hun!! You are such a strong amazing person and wife! Mudder up and move out because we (him, friend, sis and her hubbs) are going to go to lunch". Nice...A+ for support jacka$$!!
At this point, we lost I to the crazy demands of the hills. A and Q went on ahead (cuz they are awesome) and that left T and me to fight this beast side by side. 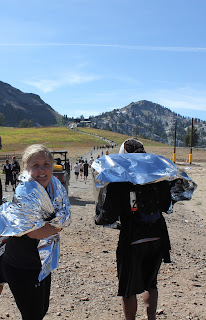 We went up and up and up and up. We braved more obstacles. We chewed some Cliff Blocks. We fought off leg cramps. We watched others literally fall clutching their calves or pulling of their shoes in pain. We saw grown men peeing on the side of the trail (oh to be a man at this point. hello...no porta potties on this trip).
At some point we came to The Plank. A mere 15 foot jump into a nice "refreshing" pond and a no problem swim to the banks. Awesome, I had to pee, and what better place to do it than in this pond. So after literally pulling myself up to the top of the plank (because this is the Tough Mudder and they had to put the 2x4's in which you used to pull yourself up 6 feet apart). The first attempt at the jump was a fail because I realized just how high it was. The second attempt, I went balls to the wall...nose plugged and all!
Finally when I resurfaced...I realized my legs wouldn't work. I could not kick my legs. They were so tired. PANIC!!! So as I was doggy paddling, with just my arms and probably looking like a Yellow Lab flailing in the water, some awesome person announced that there was a rope in the water. All kinds of awesomeness!!!! I grabbed the rope, pulled myself through the water and up onto the shore...score, I didn't drown! BUT...I forgot to pee also.
As you were coming out of the pond, there was a water station there for hydration. And some food, but that was all gone. I patiently stood in line waiting my turn for the water when I could not ignore the constant push on my bladder anymore. I looked down to confirm that I was still dripping wet and went right there in line. YES, I pee'd in the water line and I bet you anything more than half those peeps who did the Mudder pee'd there too! Don't judge!
At some point close to this (I think) it was downhill from there...literally. We trotted on down. Much of T's and my conversation at this point centered around food. What we wanted to eat for dinner. What are favorite food was. What we would do at this point for just food other than Cliff Blocks or GU. As this conversation was happening, some dude next to us looked over and said "I just want me some effing Chicken McNuggets". Those sounded good too!!
Finally, at about 5:45 we reached the bottom of Squaw. The end was in sight. BUT there were three more obstacles to face. We had to roll across a net. Easy. Except the net was more tough then I thought. But all was good. 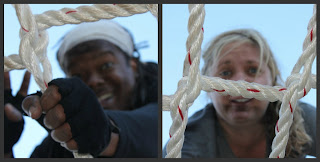 It's obvious Matt needs some work focusing on the SLR.
Then, it was a balance beam, on 2x4's over super cold water. And the beams were so long that they swayed back and forth in the middle. Totally dry at this point, I was sorta mad about getting wet again. Oh I knew I was getting wet because I have the balance of a drunken sailor. Sure enough, halfway through, I plunged into the cold murky water. 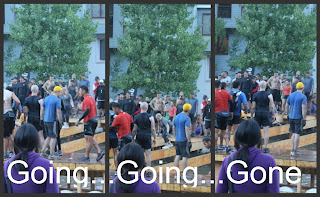 Then finally, finally the very last obstacle. It was 6:30 ish. Six hours of HELL, with no food (real food), and having to pee in a water line, I was at the end. I just had to get through the electric wires. Charged with 10,000 volts, was a slew of hanging wires in front of me. Luckily, they were spaced far enough apart to maneuver through without getting shocked. As I was picking my way through, my lovely sister begged for me to "touch just one so I can get a picture". Whatever...seriously if I got shocked I would have been so pissed. And probably pissed too. 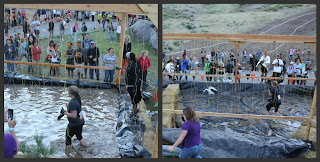 And that's it folks. I crossed the finished line, got my orange Tough Mudder headband, got another cliff bar, got a t-shirt and a free beer. Six tiring hours, $150 later (all money goes to the Wounded Worriers), bruised, battered, hungry, cranky...I pre-registered for Tough Mudder NorCal 2012!!! 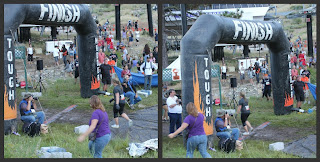 By far...one of the most memorable experiences EVER!!!!!
P.S...I walked in the house where we were staying, went straight to the bathroom, took a 45 min bath then a shower. Had steak and potatoes for dinner. Washed it down with a Washington Apple, went to bed and slept like a baby...minus the snoring (I think).
Funny Stuff At The Mudder: 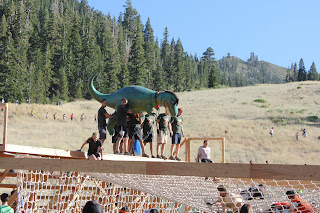 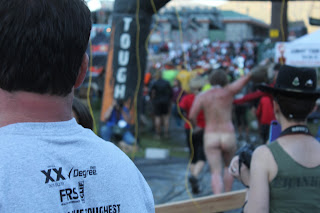 Ooops...I think he lost something 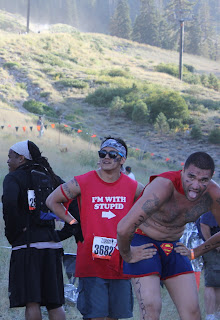 No caption needed
Some athletes come home to city parades...I came home to this: 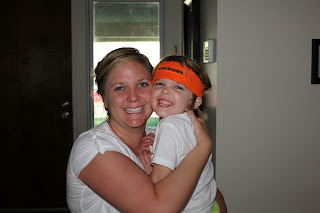 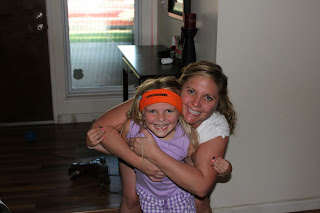 And that made it a perfect end to a perfect weekend!!!

Promote Your Page Too 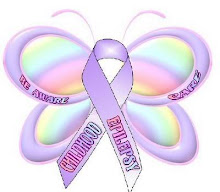 Kerri
We are a happy family living in Nothern California. Matt, my husband, does engineering for one of the state buildings. I work as a supervisor for a large insurance company. We have two beautiful daughters, Elizabeth 6 and Meghan 2. Meghan has a form of childhood epilepsy in which we are still trying to diagnose. We hope you will enjoy our stories about where life takes us!! 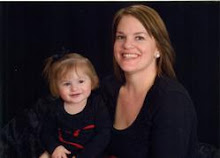 My friend Melinda tragically lost her life in January 2011. Left behind is her precious daughter Kaylee. This fund has been set up to help support Kaylee as she continues on without her mom.